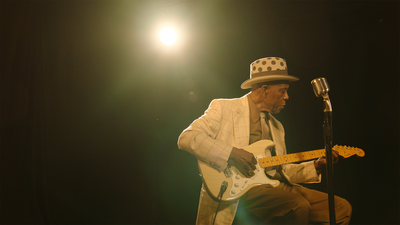 Hands down this is one of my favorite films of the year. This loving portrait of bluesman Buddy Guy is just an absolute delight. It is a lovely portrait of a lovely man.

I am a Buddy Guy fan. I first really discovered him a couple decades back when he played Jones beach as part of a Blues Fest that included the Fabulous Thunderbirds, Dr John, BB King and Ray Charles. Buddy Guy was in the middle and he was the one I remembered as he tore through he set and roamed the stadium playing out among the crowds. It was a staggering performance that made me go back many more times.

Seeing Guy live was in its way world changing because it forced me to rethink what performance was.

Seeing this film is like seeing him live, it’s a film that forces you to reconsider not only the man and his music but the history of blues music over his life time. I say this because in talking about his life Guy discusses the music and the people that touched him. By seeing the things that influenced him through his eyes we alter how we see them as well.

What I love about this film is how alive it feels. This film feels as though there is no distance between us and Guy. He is sitting there with us talking and playing. This is a documentary that feels more like a concert with a few asides from talking heads than a straight on documentary.

I bopped around the room and danced myself silly. And occasionally I was moved to tears as Guy talked about his life and journey and how he never imagined where he would end up.

A full on masterpiece.