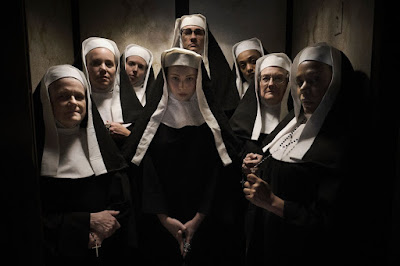 A young nun in a convent is suddenly possessed by a demon. An experienced priest along with a man about to take his vows are dispatched to get to the bottom of it all.

While I know director Mickey Reece has fans and I know some of his films are good, I am wondering what in the holy hell his film AGNES is doing at Tribeca. Its a WTF mix of genres that nails none of them makes you laugh out loud at the film for a good chunk of the running time before it shift gears in the second half into drama that only feels loosely related.

Feeling like something you'd see on a direct to DVD release rather than at a film festival this is a film that is trying to be deadly serious for much of it's running time but at the same time is trying to be funny. The initial possession scene had me roaring with laughter, and the over done slo-mo march to the exorcism made me double over and bounce my laptop on the ground.

Clearly Reece is fucking with his audience but instead of going along with the joke I wanted to punch him because I left like he was just wasting my time. I especially felt this in the second half when the film morphs into an odd drama.

What really pisses me off about this film is that there are some incredible passages of dialog. Some of the discussions are magnificently written, unfortunately they are tied to a go nowhere story and sequences that seem unconnected to reality (what nuns are these based on and year do they think it is anyway?)

Not to put to fine a point on it AGNES is a road accident. Its a film that fans of road accident films will search out. In a twisted sort of way my nastier side liked that here was a film I could be cruel to, if only in my living room. This is a film you get drunk with friends and watch. Outside of that I would avoid it like the plague.