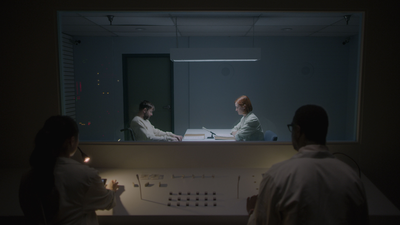 The problem with ULTRASOUND is that they have made a film that will be completely wrecked once people start reviewing it. Long before anyone gets to see it the film critics will have spilled the beans and ruined one the great cinematic rides of the year. Granted the greatness of the ride will depend upon how little you know about the film- but for those going into it blind this is going to the best cinematic theme park there is.
The only thing I feel comfortable saying is the film starts on a rainy night when a man returning from a wedding runs over some nail filled boards in the road and is forced to spend the night with a strange couple. What happens from there is the film and all of the answers are not given until the very end.
Actually what happens after that will have you talking to the screen for 100 minutes.
Now the trick with this film is that in order to dull appreciate it you need not to know anything about it. I mean you need to know zip. The joy of the film is finding out each twist and turn as it goes. The shock and surprise as well as the genuine feeling of  "WTF is it doing now!?!!!" will warm the cockles of your heart.
And when I beg you go into the film blind I am very serious. I watched the film a second time  and while I still think it's a good film I suddenly found the film as not as mind blowing because I suddenly could see  what it was doing. I connected the early moments to the end and saw some flaws I missed te first time. (Think about you reaction to David Finchers' THE GAME the first time and every time after)
Reservations about second viewings aside this is a great cinematic ride and worth seeing.
Posted by Steve Kopian at June 16, 2021