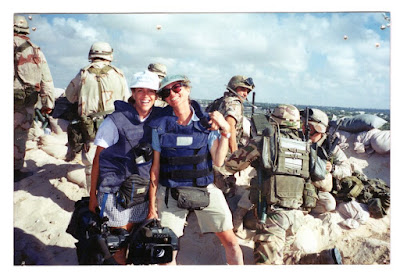 This is an excellent, if criminally too brief, look at the work of  news camerawomen Mary Rogers, Cynde Strand, Jane Evans, Maria Fleet and Margaret Moth, who broke barriers and brought back images that changed the world.
Okay let me say this up front, this film is way too short. This film should be a series with each of these women getting an hour or more to full tell their stories. Giving only 75 minutes to all these great ladies is shorting their accomplishments. Yes we get the highlights but there is so much more to see and hear.
Short or no this film rocks. This is a great film. It is a compelling tribute to a group of women who followed their hearts and did amazing things. I loved watching them doing their work in truly scary situations.  I was particularly amused several times watching the ladies calmly staying out of the line of fire while the men seem to be cowering. There is one such moment early on on a roof top, where one of the ladies (forgive me I didn't make a note)  is sitting against a wall while looking through her view finder. Mean while a male reporter is leaning over in the foreground obviously worried about the gun fire.
Above I said I didn't make a note as to which of the films subject was on the roof, and the truth of the matter is I really didn't take many notes when I was watching the film. It wasn't that I didn't want to, rather it was because I was too into watching what was happening on the screen. I simply was being carried along by the stories
This is great stuff and a must see-- at least until someone is smart enough to make a feature on each of the ladies.
Posted by Steve Kopian at June 16, 2021