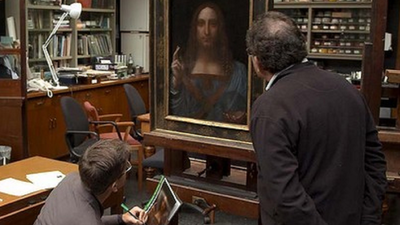 On of the top five must see films for Tribeca The Lost Leonardo is a film I cleared the decks to see. I am a huge DaVinci fan and the thought of seeing a film on how a lost painting was found was exciting.

The film is the story of the Salvator Mundi which appears to have been discovered at an auction in New Orleans. The painting  was in disrepair, but anyone who saw it thought there was a possibility it was something special. We see the efforts to authenticate it and restore it before the film shifts gears and begins to follow the wild story of how the film was sold and resold  for hundred of millions of dollars (it was originally purchased for $1100.

While I liked the film and was carried along from start to finish there was appoint where the film, which I was loving in the first half, began to slip away from me.  What I noticed was that things began to left out. Details were not given and we are kind of left to fend for ourselves. This happens each time the film shifts focus. When we go from the authentication/restoration to the efforts to sell it  we are suddenly dropped into the tale without an explanation of how we got there. The people we had been with are pushed aside and we have no people here. The question is why don’t we have their thoughts on the sale? It happens again and again as the story carries on.

I suspect there is legal issues here since at one point we can hear an off screen voice directing what one person is saying. I’m fine with that but what exactly are those legal issues?

On the other hand this is very good look at the financial game that the art world has become. Clearly its largely rich people manipulating things for their benefit and this film explains how its all is just a game above our pay grades