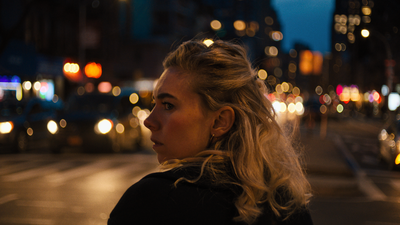 While watching Italian Studies, my main thought throughout was "what the hell is going on?" and hoping by the end it would all tie together and make sense. That was only semi the case.

The movie starts off with Vanessa Kirby at a recording studio. She steps outside and starts talking to a young woman who asks if she remembers her. Kirby says no. The young woman reminds her who she is, and mentions a guy named Simon, saying "how can you not remember Simon?" but Kirby is clueless and asks if she's sure she has the right person, the girl says she's sure.

The movie then takes us backwards (although you wouldn't necessarily have known that right away).  A woman(Kirby) is seen wandering around the streets of New York. She ties her dog outside while she goes into a store. Then she leaves the store in a haze, forgetting her dog. (whaaat?!) She continues wandering around. She goes into a store to buy food, but has no money. Goes into a hotel to ask for keys to a room, but is unable to provide a name.  She doesn't know her name or anything about herself. She wanders into a hot dog place. There she meets a teenager who turns out to be Simon, who for some reason bought a ton of hot dogs and offers to sell her one, she says "I think I'm vegetarian".  They wind up hanging out. She continues to hang out with him and his group of friends, but it's hard to know how much time has passed. I have no idea if it all happens in the span of 24 hours, or a few days or a week, or more.

In another scene a girl on the street stops her to ask if she's "Alina Reynolds" she says yes (though she clearly doesn't know if that is really her name or not). Turns out Alina is an author of a book. She goes to the library to find the book and look through it. (While watching it, there's no way to know if she's just taking on the identity of this author since she doesn't know who she is actually is, or if she really is the author)

The film also goes back and forth to the teenagers Alina's hanging out with being interviewed by her.  This was also odd. (As a side note, I liked that all the teens in the movie just seemed like teens being themselves.)

What the film really is about is a woman who has temporary memory loss, but it's just extremely bizarre and confusing and kind of all over the place. I will say there were several fun laugh out loud moments. I wished I was able to stick around for the Q&A to maybe have gotten some insight into the film, but was unable to.  Maybe I need to watch it again to understand it better. I did enjoy that it was only 81 minutes, and I kind of wish more movies were that length.