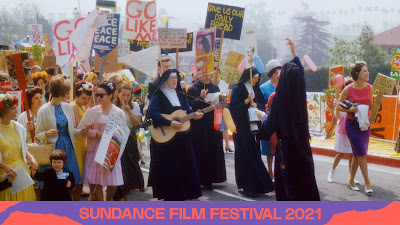 With REBEL HEARTS hitting theaters and Discovery + here is a repost of my Sundance review
The Sisters of the Immaculate Heart of Mary Is an order of nuns in Southern California. In the second half  of the 20th century many of their number joined partly out of a love of the church, but also because a patriarchal society was not the way to go. They thought that going into the church would be a rewarding life. Many found it wasn’t. But over time the nuns began to work at the catholic college and schools and engage with the community. They began to form their own ideas of what Christ’s work was. This brought them into conflict with the church and society since the women realized that they could not simply be silent or inactive in the face of sweeping social change.
The simplest review I can give Rebel Hearts is expect it to be nominated for an Oscar next year. This is a kick ass documentary about some great women who did what they had to do and simply changed the world in the process. This is a film that will touch your heart and your head in a way that few recent films have.

The story of the nuns is an important one these days because it highlights the fact that all of the things that people are in the streets fighting for are were being fought for five decades ago. That women who were nominally of the establishment, ie. The Church,  were trying to make changes says a great deal about how bad things were.

I love this film. It’s a film that adds a great deal of color to the normally beige Catholic Church. It’s the sort of film I wish I could have shown my mom, a wandering Catholic, to show her that her thoughts and feelings were not as atypical as she might of thought. It also would have delighted her to see a whole bunch of wickedly cool nuns instead of the beasts that abused her and her fellow classmates in grammar school.

This film is a stunner and one of the best of Sundance for this year. Highly recommended.