FATHOM is about efforts to communicate with whales in the wild via recordings. It’s one of the most beautiful films you will see all year. Sadly it is glacially paced and odds are you will fall asleep before a half an hour has passed. 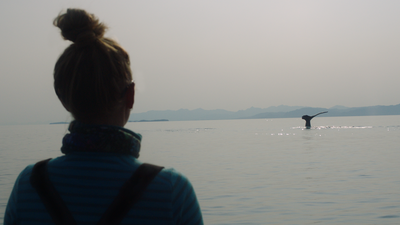 The film follows Dr. Michelle Fournet as he attempts to communicate with humpback whales. There have been efforts previously but they all went wrong, but now with the help of computers and data collected from around the world she is hoping to connect with the animals.

This was high on the list to be covered by Unseen Films at Tribeca. When it was announced Ariela jumped and called dibs on it because she loves whales so much. However not along after she deep dived into the film I got an email asking me to take a look at the film because she thought she was missing something.

I took a look and promptly found that the film simply didn’t engage me. Long beautiful sequences look spectacular but they don’t move us anywhere. All of the sequences with everyone are so low key as to be floor level. Don’t get me wrong this is interesting stuff with numerous spectacular sequences but the film never generates any excitement  and when it does it quickly loses it by going to another low key sequence.

I fought to stay awake.