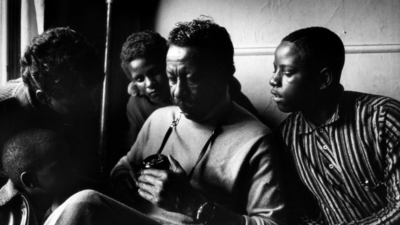 A CHOICE OF WEAPONS: INSPIRED BY GORDON PARKS is a masterpiece. It is not only a magnificent portrait of Gordon Parks, a man who changed the world but also a deeply moving portrait of the influence that the man still has on the world today.

Made up of then contemporary interviews with Parks where he talks of his life, the film also includes interviews with people who knew him, who study his work and most importantly and most tellingly with everyone who is influenced by his work. It is through the people that he influenced, including a giddy Spike Lee, that we realize that Parks maybe gone but he is still here (one photographer mentions that she knows she has the shot if it looks like a Parks photograph)

And what I love about this film is its all here. From his early days talking photos and selling them to a newspaper, to his time with life, his novels, his movies, his political activism and everything else he did. Parks did so much that it would almost be easier to talk about what he didn’t do.

Toward the end of the film I found myself moved. Listening to everyone talk about how they couldn’t do what they were doing were it not for Parks moved me.

While I was always a fan of Parks, this film really made me understand how much the world owes him. I love that we see the context of his life in total and not just his photographs or novels or movies, but the whole package.