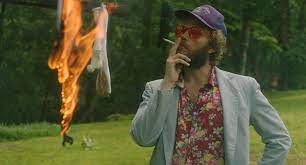 SOCKS ON FIRE was one of the 2020 Tribeca films that was not in the press screening library but was available if the PR person sent it to you. The film then showed up at several festivals where I promptly missed it, and all my friends yelled at me for doing do.

The film is Bo McGuire's record of and essay on the battle of his drag queen uncle his homophobic (and one time favorite) aunt over the house that was supposed to go to him after his grandmother passed away. McGuire was so angry with what was going on he went down with camera in hand to make a record of wat was going on.

Less a documentary than a fantasia on the battle, McGuire's family and how it was changed by fundamentalism,  and the South SOCKS ON FIRE is either going to either be one of your favorite films of the year or  it's going to annoy you.  The film is a mix of home movies, current interviews and reconstruction of events with actors is far from straight reporting and plays like a verbose Southern novel. While I loved the poetry in the telling there was a point where the form overwhelmed content and I just wanted less embellishment or a shorter run time.

While Socks didn't wholly work for me, it has worked for a good number of my friends  so if the subject matter interests you give it a shot.