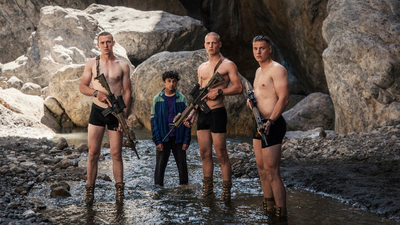 Do Not Hesitate is best seen not knowing a great deal about it.  The story of a peace keepers in a truck that breaks down, and what happens while they wait for the truck to be picked up, takes several unexpected twists.

It’s a film that doesn’t do what you think it will. The sense of “what the hell is this” begins with the first frame as we get an unexpected drum solo. This is Erik our main character is relaxing before heading off from there. The characters don’t speak in ways we have heard in other military films. These are guys hanging out not soldiers. It’s a small thing that is reinforced as things go sideways. What also unexpected is a turn late in the film that had me looking at my watch because what I thought would be the ending, wasn’t, the film still had a lot more time and twists and turns to make.

It’s a beautifully acted and shot film with a real nice sense of claustrophobia.

While the film tries a little too hard to be about something, it ultimately engages us and holds our attention with a killer story.