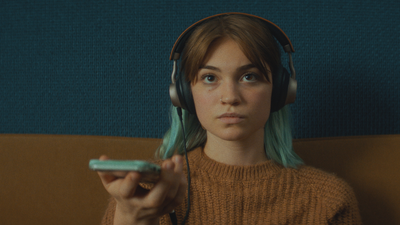 Poser is the story of a girl named Lennon who decides to make a podcast about the underground indie music scene.  She goes to shows and interviews musicians for her podcast.  She uses her cell phone to record the audio of everything. She is someone who clearly wants to fit in and be part of the scene. Lennon becomes..obsessed I guess is the right word, with singer "Bobbi Kitten" (who happens to be a real musician and performer).  While watching it, it was hard to know if she has a crush on her, or if she is just infatuated with her. She uses social media to find events that Bobbi Kitten RSVP'd to, so that she can "happen to be there" too, to further befriend her.

I kept wondering why it was titled "Poser", but I don't want to spoil anything. I will say the ending was very shocking, I said "wtf" outloud, and I am still thinking about it hours later. I think that's the beauty of film, when you expect a film to go one way, and something unexpected happens. I really liked both of the main actresses. I don't want to give away too much, but I would say that it's definitely worth seeing.