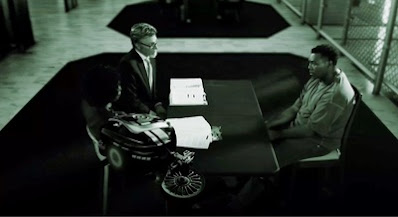 This is a VR experience set in the near future. In the future AI drones follow people around in the hope of keeping them on the straight and narrow. We are tasked with sorting out  what happened in an incident between the police and 2 cops one of which is coder out on parole that a drone was  shadowing. We have to go though the tapes and decide.

I am torn about POV. As an experience, its really cool. I watched it with a headset and side from messing up and getting weak kneed when I walked off a walkway and found myself floating in the air, I had a blast. Its a really good story and experience.

The problem with the film  is that it is very naïve. Its a program that speculates that having AI drones floating around will be a good thing Its a film that says constant supervision will make a better world. In a way its film that seems to be calling for Big Brother. I am deeply bothered by it. I'm so bothered by it that I don't know how to react.

I  do know that the film made me giggle with the assumption that the police would stand for the drones and that their ability to shoot cops even with no lethal means would be tolerated. Its a disconnect from the real world that made me question everything else.

Honestly I still don't know what I think. Some of what it is suggesting is a good thing but some of it is out of touch....

On the other hand its a fun experience and a beautifully designed world.