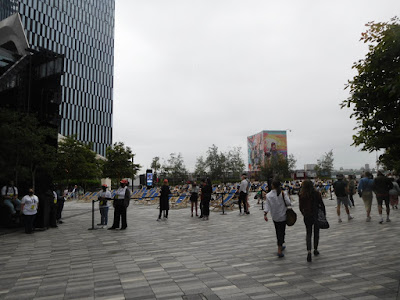 The Tribeca Festival is done for this year and it damn near killed me.  I had a great time but trying to keep up with all of the films dropping every was bad enough, but having to write on them made them even more difficult. Thank god for Ariela  because without her I would not have slept the last two weeks.

From a cinema standpoint this may have been the best year. I think I loved more films than in any other year that I’ve attended. More importantly I actually remember what the films are, this year almost all of them stood out. Amazingly there were very few I hated.

When its all said and done we covered over 150 films, podcasts, VR presentations ect. We did several interviews (which are coming, they are hung up at the transcriber) and generally had a good time.

While I largely missed doing anything in person, Ariela was repeatedly in the trenches. I hope that next year is a full on return to years past because we missed seeing friends.

Okay- how was the  fest really?

Different. Even compared to the numerous virtual fests I’ve covered in the last year it was atypical. And at the moment that is all I’m going to say. It’s not because there is nothing to say, rather that I’m trying to work it all out and do a post mortem on this years fest and I’m not done unpacking it. I’m still hearing stories about how things were and what happened here or there.

Ultimately I had a good time. It was fun

And if they ever try to do a virtual or hybrid fest again I’m taking time off from the day job since trying to do both has crippled me.

I should probably mention a the few films we saw but chose not to review:

I realized that I saw SWEET THING which returned from last year. I saw the film last year but didn't review it because the film played like a vanity project for the director and his kids.

While I was mixed on it DATING AND NEW YORK made Ariela do something she almost never does for a romcom, turn it off early because it was boring

VENUS AS A BOY was pretentious nonsense

As I wind down the coverage from this year I want to thank Ariela for being my wing woman and partner in cinematic crime. I could not have done this without you

A thank you to Melanie Addington for directing toward several titles sooner than later.

And I need to thank Danielle Solzman for suggestions and occasionally pointing out things to distract me and keep me on the straight and narrow.

And now to decompress until next year

11 that moved Steve to tears at Tribeca