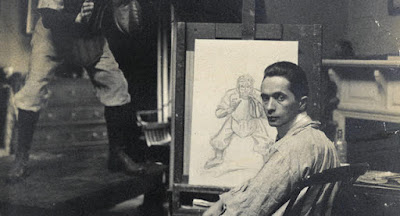 A look at legendary illustrator J.C. Leyendecker and his  art which was full of coded references aimed at the LGBT community. The film also deals with talk of how Leyendecker influenced artists and advertisers that followed him.
This is a good, but woefully too short film on one of the most influential artists of the last century. Its a beautiful portrait of the man and his art. Its a wonderful primer.
However I would love to see this expanded. I would love to hear more details. I would love to hear more abut his time in Paris or his relationship with Norman Rockwell, and more art, we need to see more art.
My desire to see more aside this is a great film.
Posted by Steve Kopian at June 19, 2021