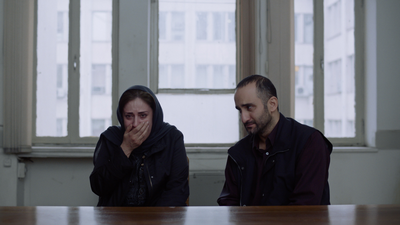 This is the story of Mina, a woman who is informed that the execution of her husband, a year earlier, was a mistake. He was innocent and that the authorities now know who the killer was. They apologize and say that there is nothing really they can do because it was the will of god. As she tries to recover from the blow, her husband’s family attempt to get her daughter away from her, saying she is not raising her correctly. Into the fray comes a mysterious man who seems nice but actually has an ulterior motive.

This is a good little drama highlighting the problem with capital punishment. It clearly shows the damage that is left behind when the wrong man dies. At the same time the film is burdened with a heavy dose of melodrama with some of the turns coming out of the need to keep the thriller like structure moving along.

And please allow me an aside--Watching the film I became troubled, not because of anything in the film, but because this is yet another heavy drama from Iran. Don’t these people laugh? Is there no music? It seems for whatever reason the only films that come to America and play the festivals and such are bleak dramas saying how wrong the society is and how terrible the people, particularly the men are. Here for example all the men are asses  and out for any money they can grab. I am so weary now of the darkness I never want to see another film from Iran again because I know this can’t be all there is any more than believing that every person from the country is a religious nut.

Reservations aside. BALLAD OF A WHITE COW is worth a look for those looking for a serious film.