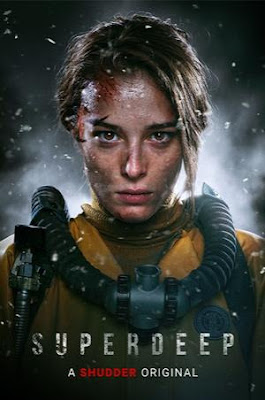 The Kola Superdeep borehole is located in Russia, near the border with Norway. It is the deepest that anyone one ever bored into the earth. The drilling stopped when the heat encountered was too much and the consistency of the rock became like plastic and couldn't be cut through by the tools at hand. SUPERDEEP takes the story of the Kola borehole, mixes it with the debunked and bogus tale once pushed by the Trinity Broadcasting Network that a different borehole had cut though the roof of hell and released the cries of the damned to make a pretty good, if over long thriller.
The film imagines that instead of a nine inch shaft, the Kola Borehole was instead essentially a deep mine that lead to a secret base. Something has gone horribly wrong and specialists and some soldiers are sent to find out what.  To say what it was would be telling but it it's icky body horror.
A tense thriller that mixes horror, science fiction and cold war paranoia (this is set in the 1980's). Its a weird ride that frequently will get under your skin as you wait to see what the hell is going on. While the film most certainly treads on similar ground as other secret lab tales, there is enough here new that the film largely holds your attention.
I said that the film largely holds your attention because the films only real flaw is the pacing. Running an over long 115 minutes the film's pacing lags in a couple of places. The problem is not that the story runs out but only that the telling is a bit too leisurely.
Over length aside. I really liked SUPERDEEP Its a great popcorn film.
Posted by Steve Kopian at June 15, 2021