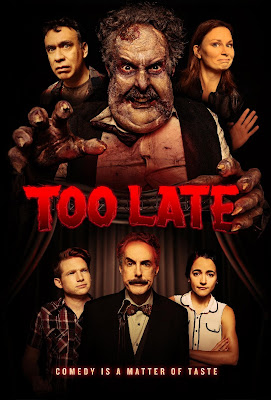 Young woman works for a terrible boss putting stand up shows together. While she and her friends think he is a figurative monster, the fact is he is a literal monster who eats the talent that he feels has no shot at going anywhere.

Billed as a horror comedy (or is it comedy horror?), TOO LATE is neither particularly funny nor scary. This is a film that sort of lays there and completely wastes it's excellent cast. Blame the script which doesn't do much of anything and kind of meanders along  to various plot points. Its a shame really because the sequences that have noting not do with the comedy club, nor the monster are pretty good. They are so good that I kind of wish they and the cast were in another film.

As good as the cast is I can't recommend this film.

Email ThisBlogThis!Share to TwitterShare to FacebookShare to Pinterest
Labels: not worth the effort