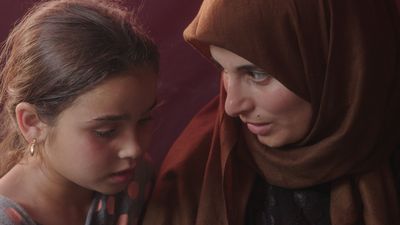 Five part film looking at Syrian refugees across the globe. Each is  mini masterpiece unto itself.

Yasin lives at the port in Athens. She and her four kids live in a tent and are trying to reach her husband who is in Germany. She stoicism is crushing/

Samra follows a family in Turkey moving into a shelter. The ine you will remember is Fayez who watches his siblings and ties to make them forget they lost their dad.

Omar live in Pennsylvania with his younger brother. He works as delivery guy as his brother attends school. They are working on getting asylum and helping the boy over come the trauma of war.

Diaa is still in Syria. She is waiting for a son who will probably never return. He final monolog will destroy you

Safwan is set in Germany as he reunites, briefly with his wife (Yasmin) and children.

This is a deeply moving film that had me wanting to pause between segments because of the overwhelming nature of the emotion kicked up made me want to pause the film to regroup. This is a tough film as we are forced to go face to face with people trying to find a better life.

I was and am rocked by this film and I am finding it hard to find words to express exactly what I feel and think. I know that I am glad I did not see this at a festival screening in the middle of the day because I would have had to skip the next film or two as I got myself back together.

This is a vital and important film that puts  face on the tragedy of war. Recommended.