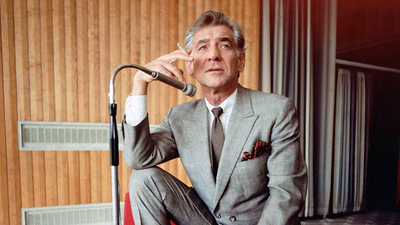 Leonard Bernstein was held in high regard by my family. My grandfather who was a composer loved him, my grandmother loved him and my aunt, who was like a second mother to me made damn sure we knew he was and what he was doing. She made sure we saw the televised young people's concerts so that we got more out of music. As a result we understood the importance of music and the arts but also connecting with the music and feeling something. And I am talking about honestly and truly feeling something.

The need to feel the emotion, or in this case feel a film is a big part of BERSTEIN'S WALL. It begins and ends with the maestro talking about and and playing Beethoven's 9th Symphony, which ends with Ode to Joy. What begins with an explanation of what the music means to him ends with us watching him as he conducts the piece and he FEELS every damn note. It is a religious experience for him as well as us.

In between the sections of the 9th we get to see the arc of Bernstein's life. For him it is a magical experience that has him connecting with people and events all over the world. It is a journey that Bernstein lays out for us via interviews, lectures and performances that force us to not only reexamine his life but our own. How is it that he could be so in touch with all of life around him? I don't now but I want to try.

What I love about this film is that it is one part biography and one part work of art. Yes we get the story of a life, but because Bernstein is seen explaining his life, his work and the music he loves, the film is lifted up into a higher realm. He aren't talking about just his life, but all life. This isn't something just here on earth but something more. This film transcends just being a biography because it touches your being and gives you a view into the realm where art heals the soul.

I am beyond words about this film. It is a masterpiece that I want to watch over and over again not because I want to know about how he came to do this or that but because Bernstein's words open doors and give me hope  that the world can be a better place.

There is a discussion in the film as to whether an artist can change the world? Can art, whatever type change the world? One need only see what Leonard Bernstein did and how he influenced all that came out after him  to know it's true.