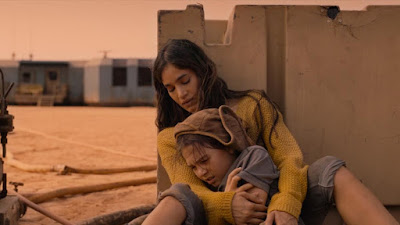 One of the real finds of this year's Tribeca SETTLERS is a film that melds science fiction and westerns in a way that opens things up both genres. It is an unexpectedly mature and adult film that gives us a great deal to think about.

Because I was lucky enough to see SETTLERS with only a bare plot description, I am going to keep it simple in this discussion as well since I don't want to give you any foreshadowing of where this film goes.

The plot has small family on Mars going along and staying alive as best they can. One day they wake up to find LEAVE scrawled across their  windows. Its clear they have been found and are not welcome. What follows is the film.

This is a true form of both science fiction western tales. It is a fictional tale that relies on science for it's setting (Mars) and is a western in it's plotting, a homestead under siege. It uses both genres to drive things along.

What I like about this film is the fact that it is very adult in what happens. While there is violence of many different kinds, this is not a shoot'em up, sheriff to the rescue, this is a complex tale that is firmly rooted in how humans on the edge of civilization might interact. It may be set on Mars and they may have scientific gadgets but for better or worse you could move this to the wilds of Montana in the 1850's and you could still have it play out in a similar way.

And that is SETTLERS strength. It is first and last about the people. It is a film about the interaction of all the characters. We remain glued to the screen because of what is happening between the actors.

I was surprised by the film early on. I thought I had a handle on where this was going to go but then the film began to get going and I realized this wasn't going to play out in expected ways.  The writing keeps it fresh. It also doesn't over explain everything. More often than not details are simply dropped in lines of natural dialog and not in speeches of exposition.

Apologies for not being more detailed but SETTLERS is a film you need to experience rather than read about. Truthfully I will have no problem discussing things after you see it, but see it first.