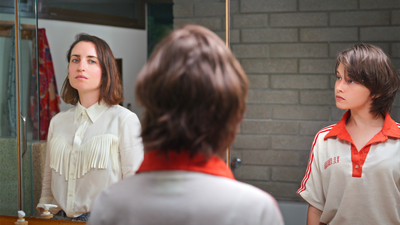 Shot during the covid lockdown HOW IT ENDS is about the last day of the earth. We are hours away from some great celestial body slamming into the earth and everyone is largely resigned to dying.  In the final hours Liza and her younger self wader through the city trying to score drugs before heading to a party where they will dance and drink and eat until the inevitable happens.

I skipped HOW IT ENDS at Sundance (the previous year was not a happy one) and I considered skipping it at Tribeca but since it was going to be my last film at the festival I decided to give it ago. If it put me in a dark place I could turn it off.

It is a maudlin and occasionally funny story about life, the choices we made and regrets.  I was amused by much of it. I was also overwhelmed by the sadness inherent in the situation. I know my view of the film of the film was colored by losing my dad and numerous friends in the last 18 months. Seeing the film and it’s world with death hanging over it all was not that far from how I’m seeing the world right now.

While I like the film it is clearly a footnote film. When you watch the film you can see that there is a distance to everyone. We only have a crowd at the end and until then everyone is 6 feet apart. It’s not completely noticeable until you realize how it was filmed. Because of that there is a lack of weight to some of the proceedings because we are distant from the characters. Personally I thought the similar SEEKING A FRIEND FOR THE END OF THE WORLD was better and more satisfying.

Regardless of my quibbling , its worth a look.