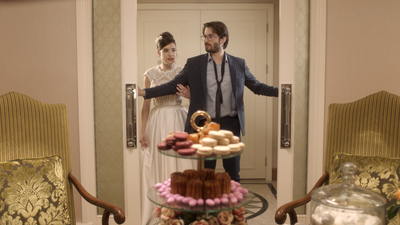 Honeymood is a very ridiculous Israeli movie about a couple who just got married. The bride sees an envelope in her new husband's pocket, from his ex-girlfriend. She insists he open it, and finds a compass ring inside it. They start arguing over it and she says he has to return it to her. Right then. Meanwhile it's 1am.

What happens next is an escapade of trying to find his ex, which also includes looking for her ex because she saw them talking at the wedding and thinks they must be together.  There are odd encounters with both ex's, and family members. Strange occurrences happen too, such as a bizarre dance with the bride and a group of bodyguards and the groom trying to talk someone out of committing suicide.

I found the bride to be so unlikeable. She was quite crazy and annoying. The groom I liked. He was more clear headed. The movie is definitely ridiculous though, but I found it very entertaining.

Recommended for a fun light movie.