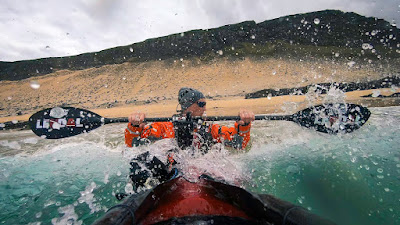 AGAINST THE CURRENT is the story  of  Veiga Grétarsdóttir who decided to circumnavigate Iceland.  While doing it clockwise is dangerous enough, going counterclockwise, or against the current is even more dangerous. Its as dangerous as climbing K2

Full of great images that are going to be lost on the home screen, AGAINST THE CURRENT scores best when it is focusing on the trip itself. There are some great sequences there and a sense of real danger that keep us on the edge of our seat. While the segments focusing on her life and transition are good, they aren’t as exciting as the round Iceland stuff and I kind of wish that this was two films, on Grétarsdóttir's whole life and one just on the amazing journey.

On the other hand this is a great story with some spectacular images which makes it a recommended film, more so if you are jonesing for something atypical and off Hollywood.