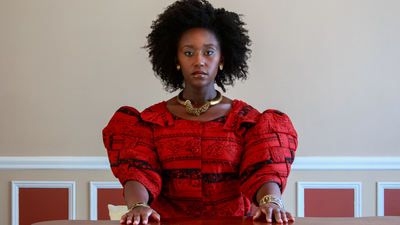 Queen of Glory is a movie about a woman named Sarah (played by Nana Mensah who also wrote and directed it!) who's studying to get her PhD at Columbia University to be a scientist. She's planning to move to Ohio in a few weeks with her boyfriend, who happens to be married with children. She gets a call that her mother has suddenly passed away.  Suddenly Sarah has to deal with planning a funeral (her family wants to have a traditional Ghanan funeral), dealing with her father who she hasn't seen in who knows how long being back in the picture, and finding out that her mother left her, her Christian bookstore in the Bronx.

I liked the story. However, it's labeled as a comedy, and I barely laughed. Maybe the humor is more subtle than I realized? I'm not sure. The movie is also quite slow. It's only 75 minutes, but it felt longer. It's a quiet film. One part I enjoyed in the film is the relationship between Sarah and the one worker of the store, an ex-con covered in tattoos, who she's initially afraid of. I also appreciated getting to see a glimpse into the New York Ghanian American community, which I had never been exposed to before.

Not a must see, but I enjoyed it.