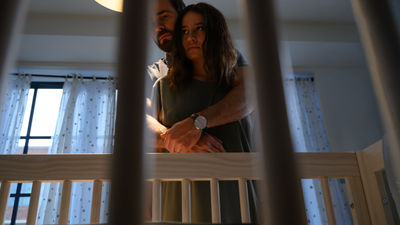 A couple having trouble conceiving, visit his former teacher, now a fertility specialist.  Once she becomes pregnant things become weird as she, and the audience, isn't certain if there are mind games going on or if she is losing  her grip on reality.

A word of warning this is not for all audiences. This is a mind fuck of a film full of blood, and gore and unpleasant things involving babies and pregnancy. I was not prepared and when it was done I warned several friends that this is not a typical thriller but a visceral blood soaked film. Yea this was a film where I repeatedly said- "oh christ you're not going to do that..."

All hail writer director John Lee who has crafted a wicked little film. While we never forget that he is playing us like a violin, we still are willing to go along because the story he is telling us is so compelling. Make no mistake Lee is a character, r a ringmaster, leading us from a blood soaked opening back through time to where it starts on to it's WTF conclusion. We see him using tricks to keep us interested and to stop us looking a the man behind the curtain. But id we aren't turning the film off,  we honestly don't care because we are on the speedy bus too enraptured of the scenery to notice its on fire. We need more directors like Lee who makes you forget the flaws through sheer act of will.

I couldn't look away though I know I should have.

The reality of the film is that despite being a kick ass rollercoaster ride from hell the plot doesn't really make sense. We can, and I have, discussed why that is, It's owing in part to the hand of the director and in part due to the film's blurring reality and fantasy too much. The result is the films internal logic or illogic doesn't hold, with the result that once I started thinking about it intellectually I've taken a step back.

On the other hand emotionally this  is just messed up and I never want to experience it again (That's a rave boys and girls).

I know I should talk about the themes and such, but after a brief conversation with a female friend I realize that I have to approach this from purely thriller perspective lest I seem like I'm talking out of my hat.

Recommend for the strong stomached and those not bothered by disturbing things.