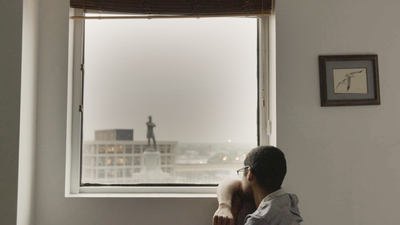 Teacher and comedian CJ Hunt takes a look at the rocky course of removing Confederate statues and monuments in New Orleans over the course of half a decade as some people try to hold on to their white washed history and others try to remove the constant reminder of racism and hatred.

Solid documentary score a good number of  points by being one of the few documentaries I’ve seen on the subject that actually makes an effort not to be  loud and screaming. Too often filmmakers reduce the side wanting to keep the statues to  pithy sound bites that make the people sound like completely craze individuals or are just pithy quips. Its funny but it kind of makes a change of mind impossible because people will dig their heels in. On the other hand what Hunt does is he finds Thomas Taylor and lets him have his say. In letting him speak we get a better idea of why people who aren’t rabid nut jobs want the monuments to remain. It may not sound like much but it moves us past the point of where it’s us or them to the point where we can change minds.

Another key thing that the film does is that it really explains how invested in slavery the south was. When I was in grammar school and college everything was keyed to showing the South as fighting to retain slavery but only as it related to the notion of state’s rights. What I was taught was that the South wanted to do things it’s own way beyond slavery. Since most people in the south didn’t own slaves they were fighting for the right to determine their own lives. What Neutral Ground does is put forward the words of the leaders of the Confederacy to show that the war really was about slavery first and foremost. That may not sound like much but for someone like me who has a degree in American History, it’s bracing to realize how off the things we were taught  about the war downplayed essential details. This was one of the few times where we are shown the real weight of the writing on Slavery. Even if I hadn’t focused on the military history in school I would never have seen all of the material Hunt puts before us.

This is a really good film.  Though to be honest I would much rather have seen a film put together by his father who is funnier and much more in your face.

Neutral Ground played the Tribeca Film Festival and can be seen July 5 on PBS’s POV.