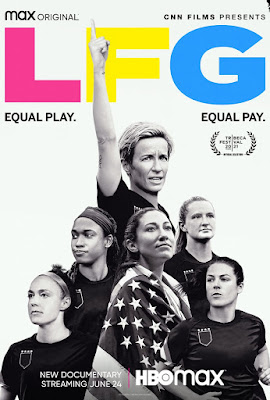 The title is short hand for Let’s F-ing Go which the motto of the American Women’s  Soccer team both professionally and personally. They abbreviate it so the moms don’t get crazy. In the context of the film it’s a battle cry for women to get paid equally in sports.

LFG is the story of the lawsuit by the women on the team  trying to force the Soccer Federation to pay  them at the least equal to the men, since after all they are the World Champions and the men are not.  Their pay is a third or less than what the men earn.

The film is also a very clear indication of why the pay imbalance is wrong across the board and not jut in sports. Women should be paid the same as men and walking out of this film you can’t help but feel that way.

This is a great film and a must see.