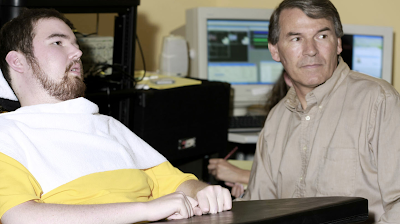 I have a great interest in the interfacing of the mind with electronics. I love the idea that we can combine man and machine. No doubt a large part of this is due to my love of science fiction. As a result I was looking forward to seeing Father of Cyborgs.

Sadly when I finished the film I was kind of creeped out by the whole subject.  While the film makes a plea for us to make sure that we investigate how we can connect our minds to machine so that we can help people, especially those with diseases that lock people inside their bodies, the presentation and the man at the center make this a subject I think we should reconsider.

For me the problem is that there is a darkness and an edge of reality nature of the film. For some reason the film seems more like a horror film than a science documentary. For example offices and the operating rooms are shot in shadows looking more like a tomb of horror than a place of hope. The low key music doesn’t help either.

Also not helping is Dr Phil Kennedy who comes off a step or two past eccentric. I was amused the first time when he mentioned that he had a neural implant himself but the repeated mentions made me start to giggle as he sounded like the owner of Hair Club for men  and his claim that he’s a client too. He also seemed just enough crazy that despite the words of the other talking heads I had the feeling that what he was trying to do may not be a good thing.

Of course it all could just be me.