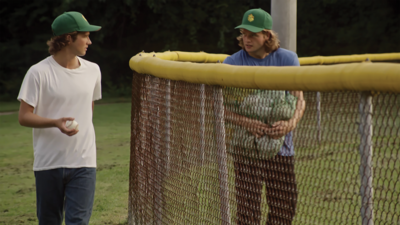 Wow. That was my reaction when Giants Being Lonely ended.

Giants Being Lonely is based on a true story, from the director's life.  It focuses on three high school students: Bobby, Adam & Caroline. Bobby and Adam play on the schools' baseball team, and Caroline likes both of them. Bobby doesn't have a mother, and has an alcoholic dad, who means well, but is pretty out of it. Adam's dad is the baseball coach, who is verbally abusive to the team, and at home, is much more abusive and violent with Adam. His mom doesn't say much. We don't know too much about Caroline's life.

The film deals with many things teens deal with: love, sex, parents, school and loneliness. There's a lot of disconnectedness and not a lot of communication happening. I liked this film, but it's extremely sad. The ending especially was sad, and shocking. I wish the film was maybe 15 minutes longer.  There are also some things that didn't seem to make sense though (at the end Caroline & Bobby say they love each other, which seemed to come out of nowhere) “It was also hard for a while to tell the two main guys apart, as they looked too similar!”I especially liked Giants Being Lonely, because I usually see high school movies with girls going through ups and downs, so it was nice seeing a movie about guys going through the ups and downs of life.

Not amazing, but recommended