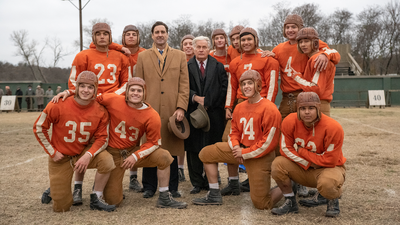 12 Mighty Orphans is the story of the boys from the Fort Worth orphanage who started playing with no shows and no balls and ended up winning the state championship.

To be honest this is  a good film but it kind of feels wrong. This odd mix of feel good sports film with gritty social commentary about the abuse suffered by the kids at the school  is a mix of the old school cliches with the gritty rawness of modern sensibilities. Its  like watching some 1930’s film where the teachers kick the shit out of the kids until they are bloody. The gauzy photography results in an uncomfortable feeling. Yet at the same time we are being asked to react like it’s a glitzy Hollywood project. It’s a weird feeling and I was left unsure of what I thought.

Despite my uncertainty 12 Mighty Orphans is worth a look for simply being off Hollywood.