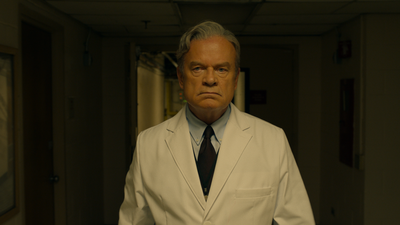 The God Committee is the story of the group at a New York Hospital that has to decide who gets priority when it comes to organ transplants. The tale is spread over a seven year period where we see how decisions made seven years ago affect the events of today.

This is a solid little drama. While there is suspense about how the plot threads will play out, the interesting thing here is the discussions about how the life and death decisions are made in hospitals. Can the institution be bribed to make the “wrong decision” with a 25 million dollar donation for a new wing? How do we handle a gut reaction to the choices, when the logic and reason and criteria tell us to go another way? We can feel the weight of the decisions and how they way on the people involved. Its tough to know what we should do, especially when we get to know some of the people whose lives are hanging in the balance.

That the film works as well as it does is due entirely to the cast. Kelsey Grammar gives a scary good performance as the doctor around which much of the action revolves. Its clear that the weight of everything is eating him alive. The need to balance what is right with the politics of being at a high level in an administration is taking it’s toll and in beautifully modulated performance we can see how the weight of the world shifts  his posture over time. And the key to what makes this a truly great performance is the way we see can see the life behind his eyes. Grammar isn’t walking through his role but living it.  Julia Stiles is her usual solid self. Why she isn’t  getting bigger films amazes me. Janine Garofalo is a revelation. I always knew she was good, but her intensity here is killer and she disappears into her role. The early scenes where some one questions where she is going and she shoots back that she is going to tell some one his wife had died is killer.

While I don’t think the film is perfect, largely due to the jumbled story line not always being clear, I really liked The God Committee a great deal. I liked it so much that I was emailing friends to see it when it appears in the Tribeca Press library.