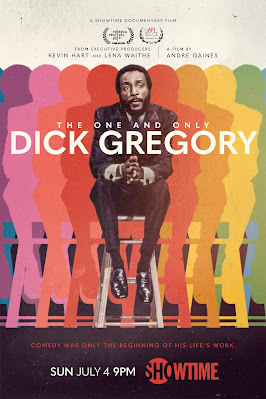 Mixing film clips, contemporary interviews with the man with present day interviews the film charts the life of a man who changed not only entertainment but the entire world for the better.

Growing up Dick Gregory was always there. He was all over the talk shows and the news broadcasts. He was a man on a mission. I truly fell in love him and his humor when I started to get into comedy. I loved the edgy thought provoking stuff like Carlin and Bruce and I remember reading some long ago article on the topical comedians that included extensive quotes of routines.  Gregory’s pieces were a revelation because they didn’t seem to be jokes but just truth phrased differently.

How good a comedian was he? His break came when he was asked to fill in at the last minute at the newly opened Playboy Club.  When he arrived he was told he didn’t have to go on, since the audience was made up of group of men from the deep South, they didn’t want him to get into trouble. He went on anyway and slayed them. He was so good that his career was made and he went from making fifteen hundred dollars in a year to over half a million.

Gregory was one of the few men who rattled the pillars of heaven and god truly blessed. As we see in in the film he was always working for the betterment of mankind. Watching the film you truly get a sense of the enormity of what he did and how so much happened because of him (he was a friend to Medgar Evers and Martin Luther King and he opened the doors for black comedians). I was moved.

While the film is probably a little bit too long at 111 minutes, it is still a fitting tribute to a man whose existence made the world a better place to live in.