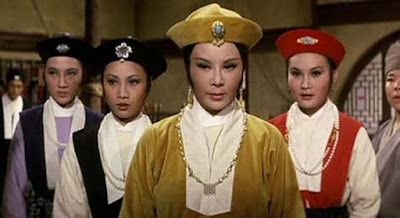 For casual martial arts movie fans, the name “King Hu” is inextricably linked with his 1967 film Dragon Inn. Boldly combining influences from the Peking Opera, Japanese chanbara, and the visual grammar of American Westerns, it revolutionized wuxia filmmaking for generations. Much of the film’s uniqueness came from a near Aristotelian dramatic unity: largely set over the course of a single day, it claustrophobically cloisters its small cast within a cramped inn for most of the runtime before exploding into the desolate expanses of China’s desert frontier for a violent, bloody climax.
Fans of the movie—particularly ones who haven’t seen Hu’s other two masterpieces, Come Drink with Me (1966) and A Touch of Zen (1971)—might be delighted to learn that he largely (and unofficially) remade the film six years later with The Fate of Lee Khan. Much like Dragon Inn, the film follows a group of rebels who track down and ambush a cadre of corrupt government officials at a desolate desert inn. There are two main differences, however. For one, The Fate of Lee Khan is much more overtly political. Unlike the heroes of Dragon Inn who assemble to rescue the children of a deceased general from assassination, the heroes of Lee Khan come together to recover a stolen map revealing the location of a hidden rebel army fighting against the Mongolians who’d conquered China in the thirteenth century. While the protagonists of Dragon Inn are undoubtably heroes, the protagonists of Lee Khan are freedom fighters sacrificing their lives to save China from an occupying power.
The second main difference between the two is that Lee Khan has an expanded cast prominently featuring women fighters. The cast is led by veteran actress Li Li-Hua who plays the rebel innkeeper who keeps the peace in her rowdy establishment with the help of four serving girls, all of whom are reformed criminals and expert fighters. All four have distinct personalities and are given space to shine in the film’s relaxed first half before the arrival of the wicked Mongolian general Lee Khan. (Angela Mao almost steals the show as reformed pickpocket Hai Mu-tan with a delightful sequence where she secretly robs a rich gambler and is forced to return his things without his noticing.) But even this great cast can’t save the film from a certain sense of redundancy that we’ve already seen this movie done better.
Posted by Steve Kopian at June 01, 2021