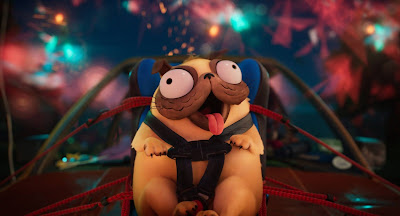 One of the best films of the year and one of the best animated films from an American animation house in decades is on Netflix and is something you need to see.  I have no idea if covid is the reason that THE MITICHELS VS THE MACHINES is on Netflix but if that's the case its a sin because the film would have made a mint in theaters once they open.

The plot has the Mitchells accompanying the eldest daughter to college. She feels like an outsider and just wants to get away from her family and was looking forward to flying to school. Along the way, machines from outer space stage an invasion and haul away everyone except the Mitchells . The plucky family then have to stumble  along as best they can and save the world.

Genuinely funny, and possessing the right sort of knowing attitude that allows it to send up all sorts of things with asides and throwaways that work in context (and ultimately drive the story because they aren't really throwaways) THE MITCHELLS... is a lovely film. It doesn't hurt that film and the filmmakers absolutely love their main characters to the point we want to give them a big hug. I laughed from start to finish.

I want to talk about this film endlessly- I want to talk about how well its made and the story construction. I want to recount the jokes and the references but I don't want to ruin it for you.  This is a film best seen knowing only the plot so you aren't expecting the funny things thrown at you. Additionally this is a film you need to see multiple ties because there are so many easter eggs and references and riffs flying by that you have to go back to catch them all.

And don't you dare think this is a kids film, it is but it isn't because it has some very serious themes about family, technology and other adult things running through it (hell one character asks, seriously what is death)

What a joy and then some.

THE MICHELLS VS THE MACHINES is on Netflix and is highly recommended,