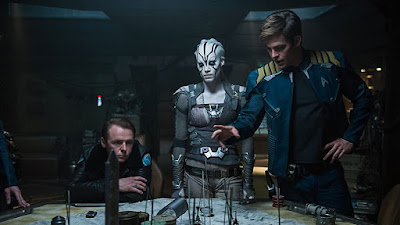 In hindsight, it took the 2009 Star Trek reboot series three films to find its sea legs. Whatever franchise grand poobah J. J. Abrams might claim, the 2009 film was obviously an audition reel for Star Wars. The film’s exaggerated iPod aesthetic did little to hide the Lucas-esque coat of paint Abrams slapped on Gene Roddenberry’s hopeful, egalitarian vision of humanity’s future. It rejected of the franchise’s philosophical and hard science foundations in favor of warring space armadas and planet-destroying super-weapons (both of which would be adopted to much better effect by the currently ongoing TV series Star Trek: Discovery).
The second film Star Trek Into Darkness (2013) was a visually ugly, tonally turgid remake of The Wrath of Khan (1982) that nobody other than maybe Abrams himself actually wanted. But with Abrams surrendering the directorial chair to Justin Lin, the man who galvanized the Fast and the Furious franchise by embracing Looney Tunes physics and soap opera theatrics, the so-called “Kelvin Timeline” was finally allowed to tell a completely original story independent of anything that had come before. Go figure: the result was not only the breeziest and most enjoyable film of the Timeline, but the one most reminiscent of the beloved 1960s television show.
Much like said series, the film takes place during the USS Enterprise’s five-year mission of galactic exploration. During shore leave at starbase Yorktown—a massive glass bubble with tendrilous city blocks circling the insides like ivy that stands as the best piece of imaginative engineering in the last several decades of Star Trek—Captain James T. Kirk (Chris Pine) and his crew are summoned to an unexplored nebula to aid a marooned team of explorers. Ambushed upon arrival, the Enterprise is destroyed, the crew captured by a vicious race of not-Klingons, and the bridge team scattered on the surface of a nearby planet. Insert a genocidal tyrant, the race to recover a doomsday bioweapon, and a ticking clock to rescue the crew, repair the Enterprise, and save Yorktown and you’ve got yourself a movie.
The film’s biggest problem is the thoroughly lackluster villain whose bland motivation to fight the Federation and groan-worthy twist backstory all feels perfunctory even by Star Trek standards. But as a showcase for propulsive action set-pieces, sci-fi fabulism, and charming chemistry among the impeccable casted performers (RIP Anton Yelchin), Beyond succeeds.
Posted by Steve Kopian at June 02, 2021