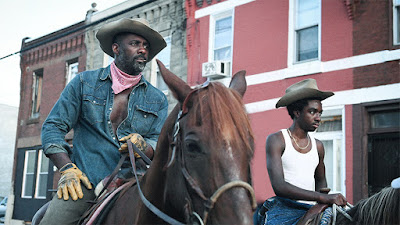 This is the story of a young African American man sent to spend the summer with his father who is a cowboy in Philadelphia.

The film is based on a novel which is based on the actual urban horse riding group that is in Philadelphia. It is a group of men and women who who have been the subject of a couple of documentaries. The film has several members of the community in the film. They can be seen during the end credits talking about the group and the community it has created.

I really liked this film a great deal. While the plot of the film hits some clichés of stories like this the setting and the characters more than make up for it.  It is clear that everyone connected with the film has a great love for the subject matter and it bleeds off the screen. We can't help but sucked in and carried along.

This is a solid little film that is worth your time.