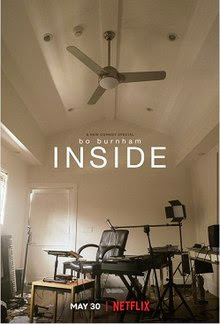 Over the last two years, my friends have all joked that we’re exhausted of living through History™. When can life go back to being boring again, we weakly smile. We’re all tired of experiencing big, important things changing the fabric of our society from beneath us (even if the changes are sorely overdue). The legacy of the COVID-19 pandemic and quarantine seems especially ominous. Not since 9/11 has one thing so drastically effected so many people all over the world; we’ll surely be hearing about and remembering it for the rest of our lives. We definitely won’t escape the pandemic in the art world. With so many artists losing their income for over a year since they couldn’t tour or perform, it will probably become the most important touchstone in our artistic zeitgeist—at least here in the United States—since the Vietnam War. Already the first truly great work of art addressing the pandemic has arrived. It isn’t a movie, it isn’t an album, it isn’t even a novel. It’s a comedy special. Written, filmed, performed, and edited by himself in his home during lockdown, Bo Burnham’s Inside isn’t just a career-best special for stand-up’s best professional self-loather since Rodney Dangerfield, it’s an astonishing exorcism of the trauma, rage, fear, and helplessness felt by a world told to shelter in place.

Predictably, the film is chockablock with the off-beat and viciously sarcastic comedy songs that made Burnham one of the first YouTube sensations in the late 00s. But they all more or less specifically address the quarantine’s effects on mental health and the dangers of turning to the internet and social media to fill the void that used to be filled by other people. The vapidity of social media (“White Woman’s Instagram”), the aggravation of FaceTiming loved ones (“FaceTime with My Mom Tonight”), and the awkwardness of sexting (“Sexting”) receive the same lambasting as the paralytic anxieties that accompany doomscrolling and being logged in 24/7 (“How the World Works,” “Welcome to the Internet”). Burnham has written self-flagellating songs about being a straight white man before, but here such introspection honestly feels like the result of someone being forced to spend a calendar year accessing and re-accessing their own privilege as the world spun out of control (“Problematic”). One of the very first songs in the special addresses the idiocy that comes from believing one can actually change the world in any meaningful way through art (“Comedy”), but what else can Burnham do if that’s all he’s ever known or done?

This sense of ironic futility and general hopelessness informs the entirety of Inside and elevates it from a collection of very good songs into something more, something desperate and cutting. As he explains early on, Burnham began making the special during lockdown as a project to distract himself from wanting to “put a bullet in my head with a gun” which is less of a joke than one might hope. Burnham famously stopped touring several years ago as he began suffering severe panic attacks onstage. But years of therapy, time off the road, and indulging his creative impulses elsewhere (like in his wonderful directorial debut Eighth Grade [2018]) afforded him the courage to start working on new comedy material. In January 2020. And then, he deadpans, “the funniest thing happened.” And lockdown knocked him and his mental health back down to square one.

As the weeks stretched to months and then to a year, something seemed to break deep within Burnham, something he channels to frighting effect in Inside. As his hair and beard grow longer, his performances become more unhinged. By the last half hour, he seems genuinely disturbed, angrily throwing things around his room in sudden outbursts and screaming guttural sobs mid-verse in his songs. Playful cries for help become deadly serious ones like when he takes a break from the music, stoically addresses the camera, and confesses “if I could kill myself for a year, I’d do it.” Though it isn’t the last song, the special climaxes with “Hands Up (Eyes on Me)” which might be the best one he’s ever written. “You say the ocean’s rising/like I give a shit,” he croons, “you say the whole world’s ending/honey, it already did.” Then, as he picks up his cameraphone and waves it around the room like a dancer disassociating on the dance-floor, he wails “hands down, pray for me/heads down now, pray for me.” And we know, in that moment, he’s actually begging us to help him.

I can’t (and shouldn’t) try to claim I understand Burnham’s circumstances or personal pain, but I identify with how he expresses it in Inside. What makes it so transcendent is that it’s an emotional and psychological time capsule of the worst year of many peoples’ lives. It captures everything I’ve mentally associated with the pandemic and the quarantine: the fear, the anxiety, the sheer boredom; the unexpected mood swings; bursts of hyperactivity followed by bouts of lethargy; the snarling contempt towards society for allowing things to get this out of hand; the agony in knowing you truly aren’t any better or more significant than anyone else. If I’m alive in sixty years and my great-grandchildren ask me what 2020 was like, I’ll tell them to watch this film. And maybe, also, to say a prayer for Bo Burnham. I think the man can use it.