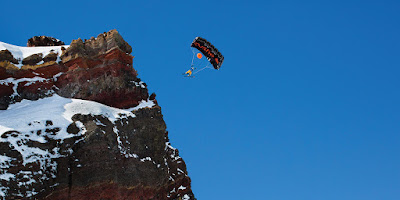 Portrait of professional skier and BASE jumper Matthias Giraud. Giruad wants to mix the two loves his life. However an accident forces him to rethink what is important in his life.
SUPER FRENCHIE is just okay. Despite being filled with spectacular images of skiing and base jumping, there isn't enough here to fill a feature. While we get to know Giruad, there isn't much to him or his story.  If you want proof consider the fact  that the accident, which was a focus of some material I saw on the film, doesn't happen until we are almost an hour into the films 75 minutes.  Several minutes are spent replaying the accident  before the film rushes to the end with to accident not being anything more tan a bump in the road. Frankly I never had any clue as to why Giruad's story needs to be a feature length documentary.
I was disappointed.
Worth a look for ski film junkies. All others need not apply
Posted by Steve Kopian at June 04, 2021