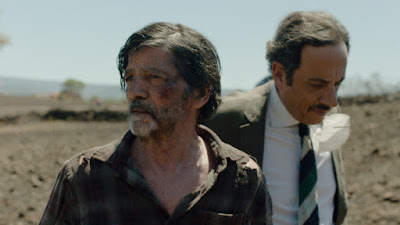 In the aftermath of a terrible fire at his son's farm, Costantino tries to explain how it all happened and the complex relationships that caused it.

This heavy drama is a look at Sardinia and the changing face of Europe. It is based upon a novel written by an anthropologist who studied the islands customs and is one of the islands greatest novelists. It is a film that is beautifully made and seriously acted.  It is a film with a great deal to say.

Unfortunately it it is a film trying too hard to be about something. From the opening sequence of the aftermath of the fire with its perfectly framed images and voice over narration the film lets us know that we are in art house territory. I don't have anything against the art house but I have always chaffed against any film that feels less like life and more like artifice.

This isn't to say ASSANDIRA is bad, it's not. Its a film that has a compelling story that made me sit unmoving because I wanted to see how it came out. The problem is I was never fully engaged and felt like I was at arms length the whole time.