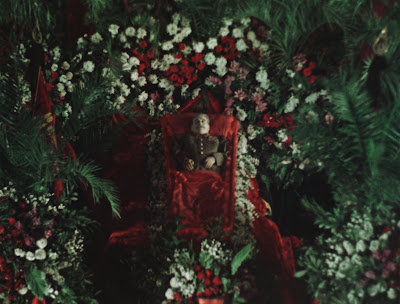 If you ever wanted to see propaganda and state controlled optics in action you must see STATE FUNERAL, a look at the funeral  for Josef Stalin. Condensing down hundreds of hours of the funeral and the circus that surrounded it, the film is measured look at the insanity of it all.

Beginning with the announcement of the death Stalin to huge crowds the film slowly builds as we watch the  circus come to town and the masses try to mourn suitably. We see it all, including  the hands of the stage managers who are constantly at work on the edges making certain that things are perfect and the illusion of greatness continues.

The pacing is deliberate. It’s a slow march that lets us take it all in and slowly see the insanity creep in. You slowly begin to wonder if everyone is a bit mad. The feeling is the result of the muted soundtrack which has ambient sound and official messages at the start that slowly give way to the madness. While never boring, I kind of wish I had seen this in a theater where it would have had my undivided attention.

This is not going to work for anyone who needs speed. This is a film about being caught up in the moment while at the same time being able take a step or to back and see the ridiculousness of it all. Some seventy years on we can see what is going on and if you are not blind you can see how the the insanity of the Soviet way and the cult of personality have bled into  not only America but other parts of the world as well. This is a film for people who want to really consider the world around them.