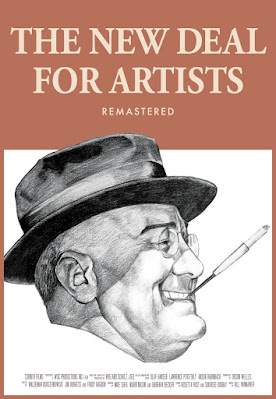 This vital portrait of The Arts Project of the Work Projects Administration which kept artists, writers, actors  and photographers alive is getting a much needed rerelease starting Friday in virtual cinemas.
Narrated by Orson Welles, whose theatrical career was funded in part by the program, and featuring a whose who of great artists and performers who were put to work by it this a you are there report on a program that most people don't know it existed. Hell, as Studs Turkel says at the start most people in the 1970's when this film was put together didn't realize it existed. The idea was to put the creative people to work and let them create art. The result changed the world.
This is a film you fall into. Told by the people who were there the film not only tells the story of the program but also makes an excellent case that we need the arts as much as we need food and water. We need it to escape but also because it connects us  to each other by letting everyone know there are others like us out there.
I was moved again. I say that because over the last 40 plus years I've run across the film and been delighted by it each time. I am delighted for what it teaches me but also because it is full of great stories about things you thought you knew or never did. Its a blast.
This is a really good film that you really need to see it when it releases to virtual theaters Friday.
Posted by Steve Kopian at May 17, 2021