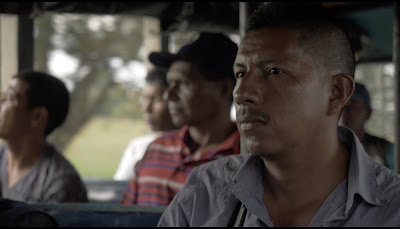 After a half century of fighting the government of  Columbia and the FARC rebels agreed to a peace treaty. As part of this many poor people would be given land. Additionally those growing illegal crops such as coca and marihuana, would destroy their crops and instead grow coffee  Unfortunately as the plan is implemented all sorts of problems arise  as the new crops are less profitable and the plan leaves a power vacuum where no one is quite sure who is in charge in the area formerly controlled by FARC. New armed groups rise up hoping to protect what they had.

Watching the film I thought I had a handle on how this was going to go but I quickly say that the road to hell is paved with good intentions as what was supposed to end a half century of violence instead created more. What was thought to be a good thing quickly turns bad as things spiral out of control, more so once the leadership of the country changes.  What I thought was going to be a simple tale heading in one direction quickly went into unexpected places.

While I thought I had a passing knowledge of what was happening in Columbia I quickly saw I had no clue. I knew that peace had been declared and that things had gone side ways but I didn't know it had gone this banana shaped. I was shocked at how it all went.

This is a wild ride. Its a story that kept me enthralled and wondering where and how this will all end. It seems that the cycle of violence is continuing on. It's an eye opening warning about what is happening in one country and a warning of how things like this could happen elsewhere.