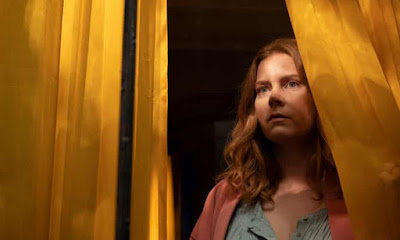 Long delayed because of poor test screenings and Covid, THE WOMAN IN THE WINDOW hits home screens thanks to Netflix and we are worse off for it until the riffers get ahold of it.

Agoraphobic woman lives estranged from her husband and daughter in a huge house in NYC. She watches old movies, drinks, contemplates suicide and watches her neighbors. When she thinks she sees her neighbor murdered everyone thinks she's crazy....

If you are going to rip off every  variation of REAR WINDOW  over the course of 100 minutes you probably shouldn't open your film with a still from the classic, unless you are going to hit it out of the park. THE WOMAN IN THE WINDOW can't even bunt it past home plate.

Woefully derivative and badly written (Tracy Letts had a hand in this, really?) the film manages to strand its cast (Amy Adams, Gary Oldman, Julianne Moore, Anthony Mackie, Jennifer Jason Leigh, and Tracy Letts) in a gawd awful mess that their combined talents can't save.

Even allowing that that the dialog is dreadful, the real problem here is we have been here before too many times. There are no surprises and once things are set up, hell even before thanks to the REAR WINDOW picture, we know how this is going to go.  When know it so well that we can write it even before all of the pieces are in place.

To be honest I was not going to cover this film but the reviews were so awful I thought I'd take a look because the film couldn't be that bad.

Avoid at all costs unless the Rifftrax, MADS or MST3K crews take a stab at it.

Email ThisBlogThis!Share to TwitterShare to FacebookShare to Pinterest
Labels: mst3k material, not worth the effort, thriller