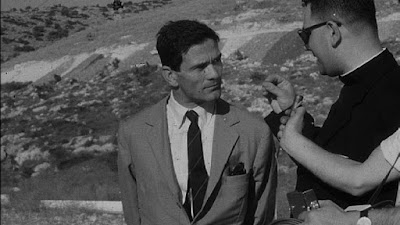 Pasolini and his advisor Don Andrea Carraro travel across the Middle East looking for locations for THE GOSPEL ACCORDING TO SAINT MATTHEW.
Brief ten minute film (playing with the film NATURE) is a killer film. A heady mix of location scouting  and philosophical musings, it has more food for thought than most other feature films. Frankly I as so floored by the film that I watched it several times in a row.
Highly recommended.
Posted by Steve Kopian at October 02, 2021