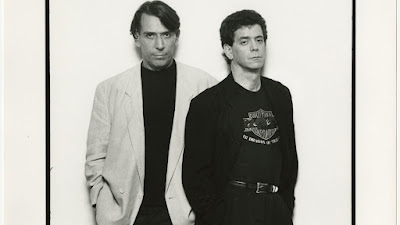 Ed Lachman's concert film has Lou Reed and John Cale performing the titled album together.
The music is everything here as Reed and Cale perform a stripped don version of the songs. While the film doesn't have a great deal of visual variety, this isn't a classic concert film, but just the two musicians performing in a studio, the film is non the less compelling. It works because of the music and because Cale and Reed are just son interesting to watch we don't want to look away and not see how they making all the wonderful music.
Highly recommended the film is playing twice at the New York Film Festival, once with the Velvet Underground and once on it's own. (Details here)
Posted by Steve Kopian at October 01, 2021