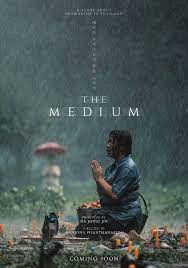 While it probably is too long at two hours and ten minutes, THE MEDIUM still packs one hell of a punch. It’s a twisted film that is going to leave you feeling uneasy for days after seeing.

One of the best of the found footage films I’ve run across the film is the story of a film crew doing a story on a shaman in the backwoods of Thailand. She is supposed to be able to commune with the god  of her village. Of course of the course of the filming things go horribly sideways.

This is some messed up stuff.  I can completely believe that the film has connections to the Korean film THE WAILING which is simply put one of the most messed up and truly scary horror films I’ve ever seen. I wasn’t aware of the connection until after I saw the film, which is good because I may not have watched it had I known before.

I can’t stress to you this is a truly messed up film (yes I know I said that already but it’s that sort of a film). I’m talking about the sort of thing that just might have you talking to the screen.  As such if you think I’m going to clue you into what happens you’re seriously mistaken. I had to endure the insanity and as a result I am hoping to inflict the same fear and uncertainty upon you.

Normally I hate found footage films but when it works like this one, I’m not sleeping for days afterward.