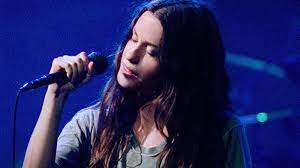 This HBO portrait of Alanis Morrissette has been disavowed by the singer because of the way the material was shaped by the filmmakers with a sensationalistic shading. If I were the singer I would be disappointed because the film is simply so bland.

The film is film is primarily a look at the singer and her career leading up to and through the period of the release of her album Jagged Little Pill. The film consists of an extensive interview with the singer intercut with footage of her her life interviews with the people who knew her along the way.

As great as the interview with Morrissette is, the rest of the film is really dull. We've been here before and we've seen the same sort of thing  hundreds of times. This is your standard issue portrait of the artist doc with all the typical bells and whistles. Worse the film only seems to be interested in focusing on a certain period of her life and certain aspects. You have the cooperation of a young woman who changed the world and you don't do anything with it. More importantly why don't you tell her whole story.

I got bored early and largely stayed disinterested until we got back to the woman herself talking about things. I was so disinterested that I fund I had to keep skipping back to interview segments because case I was looking away.

For what it's worth the film does improve how one thinks of Morrissette. The woman sitting before us is clearly in charge and we instantly fall in love with and respect. I now would love to meet her.

As for the film, I could easily never see it again.(though if I would happily watch all the unedited interview footage)