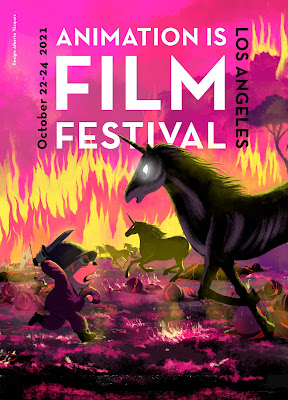 Animation Is Film is a killer animation festival in Los Angeles. It’s a fest that is screening some the best animated films you will see all year, plus it’s having a ton of special events and talks. The festival is so good that I am trying to arrange to do coverage of the festival from a distance.

The festival is geared toward  showing that animation just a means of telling important stories. For example the film JOSEP is a look a concentration camp during the Spanish Civil War. The almost certain to be Oscar nominated FLEE is about trying to get out of Syria. These are not the sort of thing that most people think of when they think of animated films but Animation Is Film. wants to correct that.

Of course the festival is showing more family orients which explains RAYA AND THE LAST DRAGON and THE MICHELLS VS THE MACHINES.

NAHULE AND THE MAGIC BOOK

Do yourself a favor- Go buy some tickets. For more information  and tickets go here

Email ThisBlogThis!Share to TwitterShare to FacebookShare to Pinterest
Labels: animation is film 2021