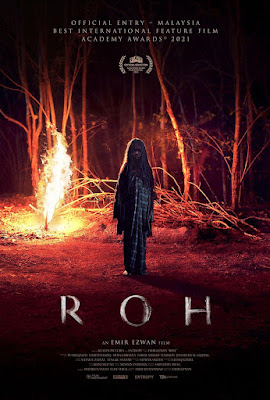 A mother and her two children live away from any village. The are wary of outsiders. However they take in a little girl  who tells them they will be dead by the next full moon before slashing her own throat.

Moody Malaysian horror film is all about things unseen and implied. While we don't see a lot of scary things, things are implied by sounds and words. This isn't to say what we see isn't scary, it is, more so since director Emir Ezwan picks and chooses for effect. For example once we see a throat cut we are in the palm of his hands as we wait for the next terrible thing.

This is a film for anyone who love not only folk horror but slow burn horror. This is a film that slowly builds in intensity to the point where by the time it ends we are deeply bothered.